cast-iron drum, which served as a brake housing.  They were "self-energizing" in that some braking energy contributed to braking effort.  When the disc make initial contact with the friction surface, small balls set into oval holes leading to the surface apart to augment braking energy.  The effect was lighter pedal pressure than caliper discs, plus less fade, cooler running, and more friction surface than comparable drum brakes.  Because of its high production cost, the all-disc system was standard only on the 1950 Town and Country and on Crown Imperials through 1954.  It was a $400 option on other Chryslers, and thus rarely ordered.  Current owners of cars so equipped consider the A-L brakes reliable and very powerful, but grabby and oversensitive."

Here is a magazine ad from 1951 which explains the A-L Disc Brake System a little better and gives more historical background of this amazing first from Chrysler (click on the small image to see a larger view): 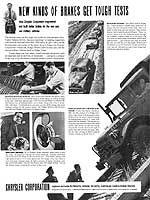 This page was last updated April 23, 2002.  Send us your feedback, and come join the Imperial Mailing List - Online Car Club