In the summer of 1963 I was eleven years old, and my parents let me take my first job. I was going to be paid the princely sum of $25.00 to mow and water a neighbor’s yard while they went on their summer vacation for two weeks in the beginning of August. We lived in Chatsworth, California in the San Fernando Valley and summers could get quite hot. When the neighbor returned I had apparently done a good job and was paid the $25.00 plus a $5.00 tip. This was a lot of money for a kid to be paid back in August of 1963. 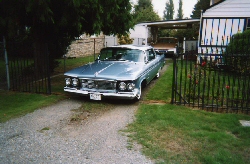 At the time I was collecting 3 in 1 AMT 1/25th scale model car kits. Of course my favorite cars were Imperials and Lincolns. These kits cost between $1.50 and $2.00 each depending on the skill level required for the customized versions of the cars, which I never did. I always built them stock. With my wealth I decided to by ten model cars and put the rest in a savings account as my parents had suggested (more like demanded!).

Two of the models I chose were the 1963 Imperial Crown Hardtop and Crown Convertible. Together they cost $3.00 plus .12 California State Sales Tax, which at that time was 6 cents on the dollar. I built them both. The hardtop was painted Metallic Teal Blue with a black interior, and the Convertible was painted Claret with a saddle color interior. For the next 30 years these models, and the many copies I had of the 1963 Imperial Sales Brochure, were the closest thing things I would have to owning a ’63 Imperial, though I would admire them frequently on the road as a child, and occasionally later on car lots as an adult. 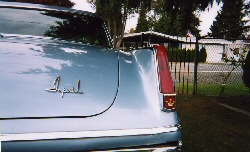 In early 1989 my friend Wayne and I were cruising the wreaking yards in Kent along the Green River looking for a front fender for my trusty little 1976 Ford Pinto which had been hit by another driver as I drove through an intersection close to my home. Parked in front of Green River Auto Salvage was a Silver Blue 1963 Imperial Crown 4 Door Southampton. It looked pretty good from the street so we decided to take a closer look. My friend Wayne had once driven a 1963 Crown and had always considered it the “best car he had ever owned”. The car had a For Sale sign in the window so we decided to find out more.

It belonged to the owner of the wreaking yard. I can’t remember his name, but he seemed like a nice enough guy. He and Wayne jawboned about the Imperial for a while when it sounded like Wayne was going to try to make him an offer on the car. The asking price was $3,250 which was kind of steep, even if the car was pretty nice. My friend Wayne was very good at dealing on a car, but I think this guy had been around the block a few times with guys like Wayne and had no intention of coming down on the price. 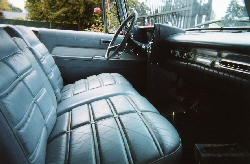 It finally happened. Wayne offered the man $2,500 for his Imperial. I thought the man was going to explode! His face turned bright red, his hands and began to shake and he bellowed “IF I CAN’T GET $3,250 FOR THAT NICE CHRYSLER CROWN I’LL JUST PUT IT THROUGH THE CRUSHER!” and then “I’VE CRUSHED LOTS OF CARS THAT WERE AS NICE AS THAT AND DIDN’T EVEN BLINK AN EYE!”.

I don’t remember anything else the man said. I just knew that he was real big and he was real mad. Wayne was mad too. He said, “well if you change your mind, here’s my number” and he tore a deposit slip out of his check book leaving it on the counter. He looked at me and said “C’mon Paul, let’s go” and we left. As we passed the Imperial I looked at it again and told Wayne how sad I was that we probably caused that nice car to be turned into a parts car and probably crushed. Wayne said “don’t worry, he’ll call back”. I thought, SURE!

A week later Wayne told me that the man’s wife had called him and said that they had talked it over and that he had decided to sell the car for $2,500. I was amazed. The car was now located at the man’s house in Federal Way which is about 10 miles south of Seattle. We looked the car over carefully and still were pleased with what we had found. It said that it had 72,212 miles on it. I looked in the glove box and found the original owners manual. The car had been bought new in Tacoma. All of the warranty papers and early service records were still there. From the condition of the car we both thought, and were correct, that this really was a low miles car. It had been touched up in many places, and it needed more, but it had the look of not having been molested or ever in a serious accident. We discovered that the carpet was very wet, and that apparently the windows leaked. Wayne decided that he liked it and he bought it. 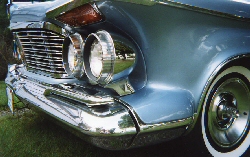 Over the next year or so Wayne had some paint work done, but he became disinterested in the car. If it sat for very long, the transmission would leak all over the garage floor. If it was raining, the carpet would become wet and cause the windows to steam up. The power steering leaked and it made a “funny noise” when it was in gear at stop lights. Obviously the car needed work, and Wayne was just too busy to ever get around to doing it. He did keep it in a nice dry garage.

Fast forward to 1997, Wayne had decided to sell all of his cars, including the ’63. He knew that I liked Imperials and had a few already, so he offered me a deal on the car. I really didn’t want to add more cars to my already unmanageable fleet. During 1997 I had bought ten cars and sold two. Finally in March 1998 I agreed on a deal with him for it. By this time the car had been sitting for at least 6 years without being moved. I spent the better part of a day getting it going again. I was able to drive it around the block, park it in front of his house, and then it quit. I had already bought it, so he wanted it gone, but it just wasn’t going to run. 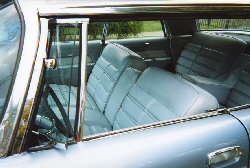 I decided that I would call Triple A and have them tow it to my house so that I could work on it, but Wayne wouldn’t hear of it. He said that “it was a running car and he wasn’t about to have it leave his house hooked to the back of a tow truck”. We decided to try to push start it with his Lincoln Town Car. Luckily it was down hill, so the push wasn’t too hard on his car.

Once the Imperial was rolling and the ignition was turned on I pushed the button for 1st gear. The car sputtered and then made a giant backfire out the tail pipe. At that point Wayne agreed that the car should be towed so I called Triple A after all. When they hooked the car up and began to raise it, I saw that the muffler had been deformed by the explosion.

Once home I was able to determine that the inside of the distributor had come apart. If I remember correctly, there is a little clip that holds a pin attaching the vacuum advance lever to the contact points plate which had come off allowing the lever to fall and the plate to move freely inside the distributor. Once I reassembled the inside of the distributor, I was able to start the car and it ran well. After that I parked the car in my garage and there it once again sat until about one month ago, July 2003.

This year I decided to work on my Imperials and make them all road worthy. This has been a huge undertaking. I joined the IML and I have had the help of a good friend. The first thing we agreed to do was rebuild all of the brakes. As with the others, we did the ’63 and filled the system with DOT 5. Since then I have been driving it, working on it myself, and having some things (that I can’t or won’t do) done at a local shop here in Burien, Washington. 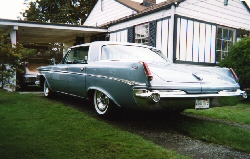 After rebuilding the brakes on the ’63, I ordered the external seal kit for the torqueflite from Pat Blaze. I had it put in at Dean Transmission in Downtown Seattle. They also replaced the center drive shaft support bearing, and rear engine mount. The next job was to determine the source of that “funny noise” that it made when it was in gear at a stop light. Since the water pump and power steering pump were both leaking, I bought new ones, and took it to a local shop that I do business with called Hiline Automotive. The manager agreed to take apart the front of the motor and inspect the timing chain. I knew that the 440 had synthetic timing gears so in case my 413 did too, we would replace it with cast metal ones. What we found was that the vibration damper had broken apart and was rubbing against the outside of the timing chain cover. The timing chain was fine and it was cast metal. He put it all back together with the new parts, belts, and hoses. Since then I have taken apart two of the doors and rebuilt the power windows so they now all work. I also replaced the power pack for the electro luminescent dash lighting and it now works well, too.

All in all it has been a rewarding experience. I can now enjoy my 1963 Imperial Crown and have been for the last two weeks. It is very quiet and tight which is further evidence of its low mileage. The unfortunate thing that happened to this car was that it sat for very long periods of time between owners. At least it seems to have mostly sat in a warm dry garage. I have been able to find out some of the cars history. 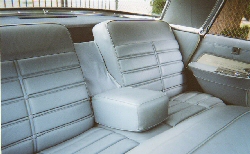 It was purchased new by the original owner in Tacoma, Washington on August 7, 1963 at Steven Motor Company. The records indicate that it was driven and serviced until 12/27/66 when it had 38,264 miles on it. There was a Texaco Service sticker on the door post from June of 1975 that showed it was serviced at 40,298 miles. The next time it was registered was in March 1986 at 41,532 miles. This owner lived in Mountlake Terrace, Washington, and may have been a relative of the original owner. A cell phone was installed, and the car was driven about 30,000 miles. At some point it broke down on the I-5 freeway between Tacoma and Seattle, which is how the owner of Green River Auto Salvage ended up with the car. My friend Wayne never drove the car enough to use up one tank of gas. 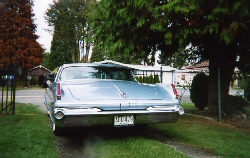 Today the odometer says 75,749. This is about where it would have been if the original owner had kept driving it until the summer of 1969. What ever happened and why I may never know. What I do know is that my 1963 Imperial was bought new the same week that I was watering our neighbors yard while they were on summer vacation in August 1963, has been garaged most of its life, and was waiting for me to replace all of those parts for the very first time. When I was under it at the transmission shop last week we discovered that it still had the original shock absorbers on it. Guess what I will probably be replacing next!

This page was last updated October 25, 2003.  Send us your feedback, and come join the Imperial Mailing List - Online Car Club